v.責罵 [to forcefully or angrily tell someone they should not have done a particular thing and criticize them for having done it] 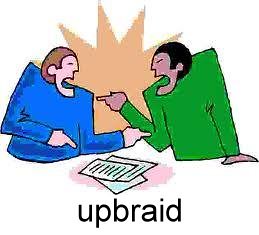 v. [to improve the quality or usefulness of something, or to raise something or someone to a higher position or rank]

ex. Once in a while, we get messages asking us to upgrade service, such as upgrading from windows 7 to windows 10.

n.動亂 [A violent or sudden change or disruption to something]

ex. Some people are afraid of same-sex marriage will cause social upheaval, but the others consider it is an improvement to human right. 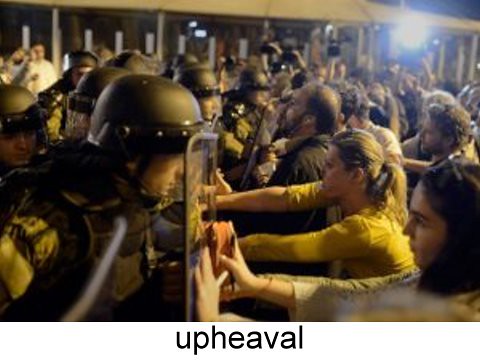 v.支持 [Confirm or support (something which has been questioned)]

ex. The effort is part of the United Kingdom's commitment to upholding OPCW's integrity overseeing a global ban under the Chemical Weapons Convention. (source)

adj. 挺直的 [(of a person) sitting or standing with the back straight.]

ex. As one of Dragon Boat Festival traditions, people would try to balance an egg and make it upright.

n.喧囂 [ A loud and impassioned noise or disturbance. ] 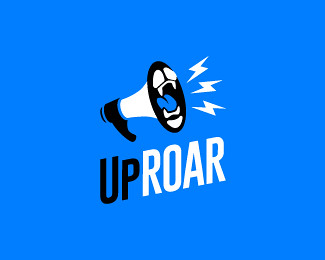 adv. [toward or at the rear of a theatrical stage]

v. 搶某人的戲 [ Divert attention from (someone) towards oneself]

ex. iPhone8 is totally upstaged by iPhone X during the release conference; people are so excited about the new 3D applications.

ex. We don't want the flower girls upstaging the bride.

ex. As there is an upswing of the ratio of senior citizens, the government starts the long-term care program.

ex. We should plan the budget for the most urgent need.

v.侵佔 [Take (a position of power or importance) illegally or by force.]

ex. to usurp the throne.

ex. The businessmen usurp Aboriginal land rights and result in the overdevelopment of land.

n.高利貸 [The action or practice of lending money at unreasonably high rates of interest.]

Ex. A former legislator has been sentenced to four years in jails on usury, fraud, corruption …. 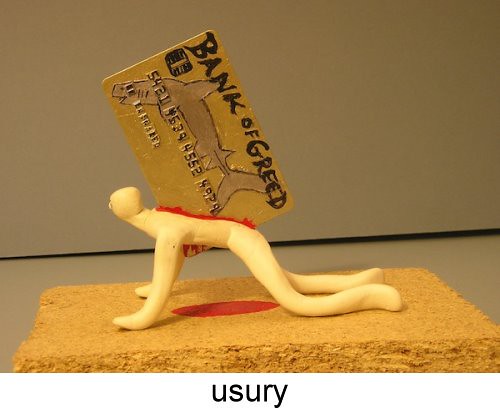 v.利用 [Make practical and effective use of]

ex. A research group found a better way to utilize hay to make waste hay into hay charcoal, instead of burning it. 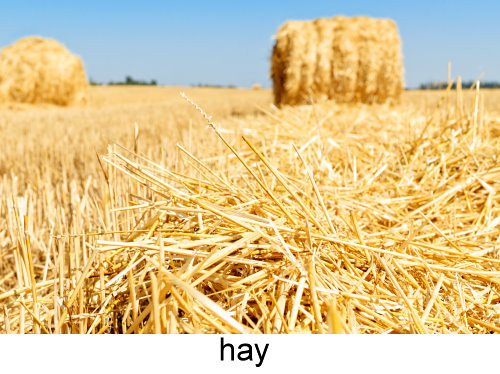 adj. [Designed to be useful or practical rather than attractive.]

ex. Many early software programs were designed to be functional, i.e. utilitarian, and hence the most of them used command line instead of GUI interface.